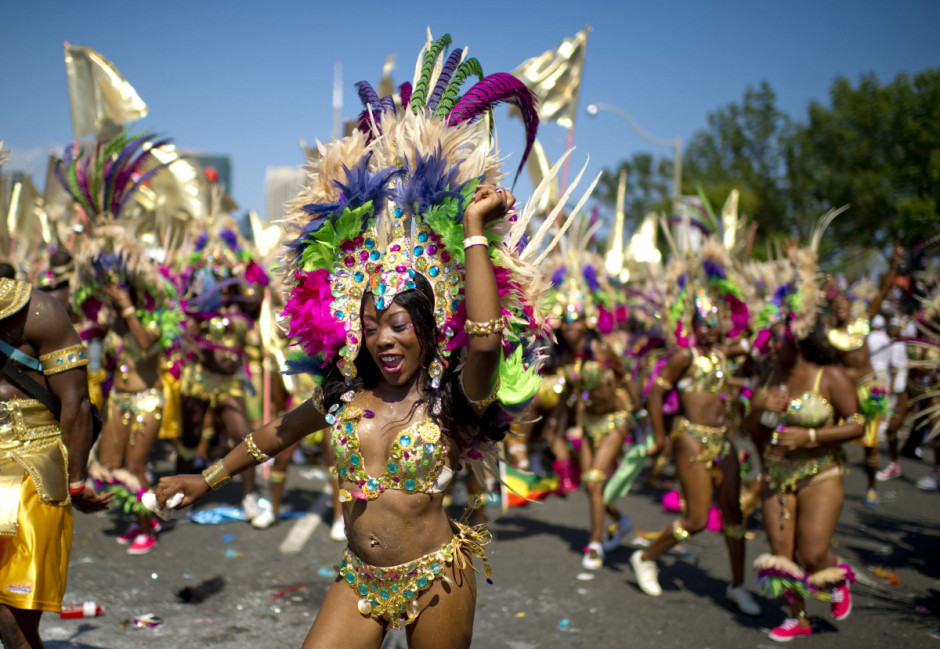 If you come to St. Lucia in the summer time, you simply cannot miss the Greatest Party on the Island. ‘Carnival’. Carnival is the time where persons shed their inhibitions and the daily constraints of life, to indulge in the ultimate party. Whether you manage to ‘Jump’ in a Carnival band or not, there are a slew of activities leading up to the event, giving you plenty of options to enjoy that St. Lucian Carnival feeling.

Many persons know Carnival as the two day parade, where revelers march the streets in bright costumes; creating a wave of color, excitement and pure pandemonium. However, the festival is a significant part of St. Lucian history as it was birthed from the European tradition of “Carne Vale” “Fleeing meat”. There, large celebrations were held prior to the advent of lent, where persons would fully indulge in their guilty pleasures. It was brought to the Caribbean by European settlers during colonization, where after emancipation, freed slaves adopted the tradition which has slowly evolved into what it is today. An eclectic mix of African, European and religious roots.  Here are a few events that make this season so amazing. 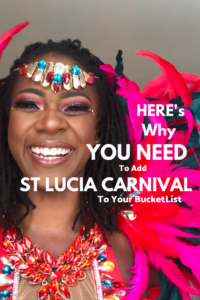 Events that are a staple of carnival.

A popular genre of music found throughout the Caribbean, calypso focuses on making social commentary on current issues, using witty, often humorous lyrics. Contestants perform at various ‘calypso tents’ (indoor buildings) in hopes of being crowned the Calypso king or queen. The entire ambiance is lively, with local food & drinks on sale, and is an excellent way to gain insight into local culture. 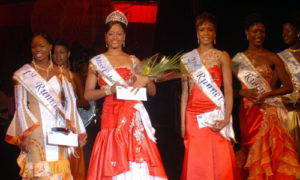 Carnival Queen and the runner ups

The Carnival Queen Show is another highlight of the St. Lucia carnival season, and is like the Miss America Pageant with a twist. Every year, eight beautiful, intelligent young women vie for the title of carnival queen by maneuvering their way through various rounds including: Talent competition, costume competition, evening wear and more. The winner of the competition becomes an ambassador for the Island and representative at regional competitions. They also use the opportunity to shed light on a cause of their choice, and have won a range of prizes which included scholarships to study abroad.

J’Ouvert is derived from the old french term for day break, and is the pre carnival parade which takes place the night before carnival Monday. As the name suggests the festival begins in the late hours of Sunday night and ends a few hours after dawn on Monday morning. While J’Ouvert is less elaborate than the costumed pageantry of carnival (typically done in T-shirt & Jeans), it is still a great spectacle. ‘Jumping’ in a J’Ouvert band, Jumpers douse themselves in colorful paints and powders and dance the night away. Following a route through the streets of Castries, it makes for a great experience and an atmosphere of inclusion for all of the public. Persons with any energy left afterward, go home to prepare for the real parade later that day.

Special events and parties put together by leaders of the various Carnival Bands. 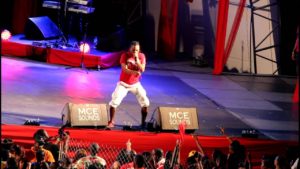 One of the most popular pre-carnival parties held by the Carnival Band RED Unlimited. The event takes place at the Iconic Pigeon Island National Landmark. This 44 acre islet boasts plenty of wide, green, open space; decorated with historical ruins and a grand fort overlooking the Atlantic Ocean. The event begins from the late evening into the early hours of the morning and attracts large numbers, as International Soca Powerhouses headline the show. Several  local stars also perform. Some of the previous guests included Mega Soca Star Machel Montano and Kes the band.

You may think that Partying and Breakfast don’t mix, but ‘Just 4 Fun carnival band has something different to say about that. Starting at 4:00 am, patrons can partake in unlimited breakfast prepared on the spot, as well as an array of creatively crafted alcoholic drinks including rum snow cones. Yum. The fete is held on the lush grounds of the Pigeon Island National Landmark, so party goers come dressed to impress. The DJ creates a ‘vibe’ with the latest mix of Soca and Dancehall, making this event one to remember. Live performances by various popular Soca artists are held on the main stage, as persons dance and create memories way into the afternoon. 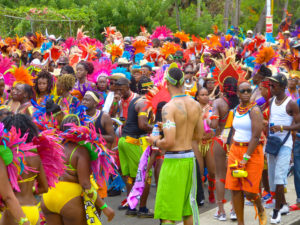 Carnival Monday is the big event, where revelers from the many costume bands take to the streets. Members march behind a truck which pumps exciting music, acts as a rest stop, provides food, sprinklers to beat the heat and of course, free flowing drinks. Persons show superhuman endurance as they dance and party along a route that could be considered a marathon.

Carnival Monday is also used to showcase the creativity and flair of the costume designers, as the band with the most creative costumes vie for the title of Band of the year. The costumes usually tell a subtle story or make a social commentary.
Finally, St. Lucia carnival creates an air of togetherness, as our brothers and sisters from all over the Caribbean and the wider world, cross over by boat or by plane to join us in this magical parade. Definitely making Carnival, the greatest party in St. Lucia.
For a complete line up of all activities click here.